ARG-007 has been developed by leading researchers at The University of Western Australia and the Perron Institute.

Despite considerable research, there are currently no marketed drugs capable of protecting the brain from damage following stroke

This means there is an urgent unmet need and priority to search for widely applicable and effective neuroprotective drugs for stroke patients.

Over the last 6 years Argenica’s lead scientists have been working with ARG-007 to determine its ability to reduce brain tissue death following stroke. We are hopeful that we have developed a neuroprotective drug that can be administered in the field by paramedics, and used in conjunction with endovascular therapy (thrombolysis/thrombectomy) to improve neuroprotective outcomes, and importantly increase the number of patients amenable to thrombolysis and thrombectomy.

We have accumulated a comprehensive body of published preclinical studies demonstrating neuroprotective efficacy of ARG-007 in multiple models of stroke and other CNS models of injury. In stroke, neuronal excitotoxicity, caused by increased extracellular glutamate, causes neuronal calcium overload and mitochondrial dysfunction. In several, well-established, in vitro models of stroke we demonstrated that ARG-007 is neuroprotective, in a dose-dependent manner.

The ability of ARG-007 to slow the progression of brain injury (infarct) and preserve brain cells would increase the number of patients suitable for thrombolyisis/thrombectomy, as well as maximising the amount of available salvageable brain tissue at the time of restoring blood flow.

Based on MRI studies we have demonstrated that ARG-007 can significantly slow infarct growth and preserve salvageable penumbral tissue following MCAO stroke. 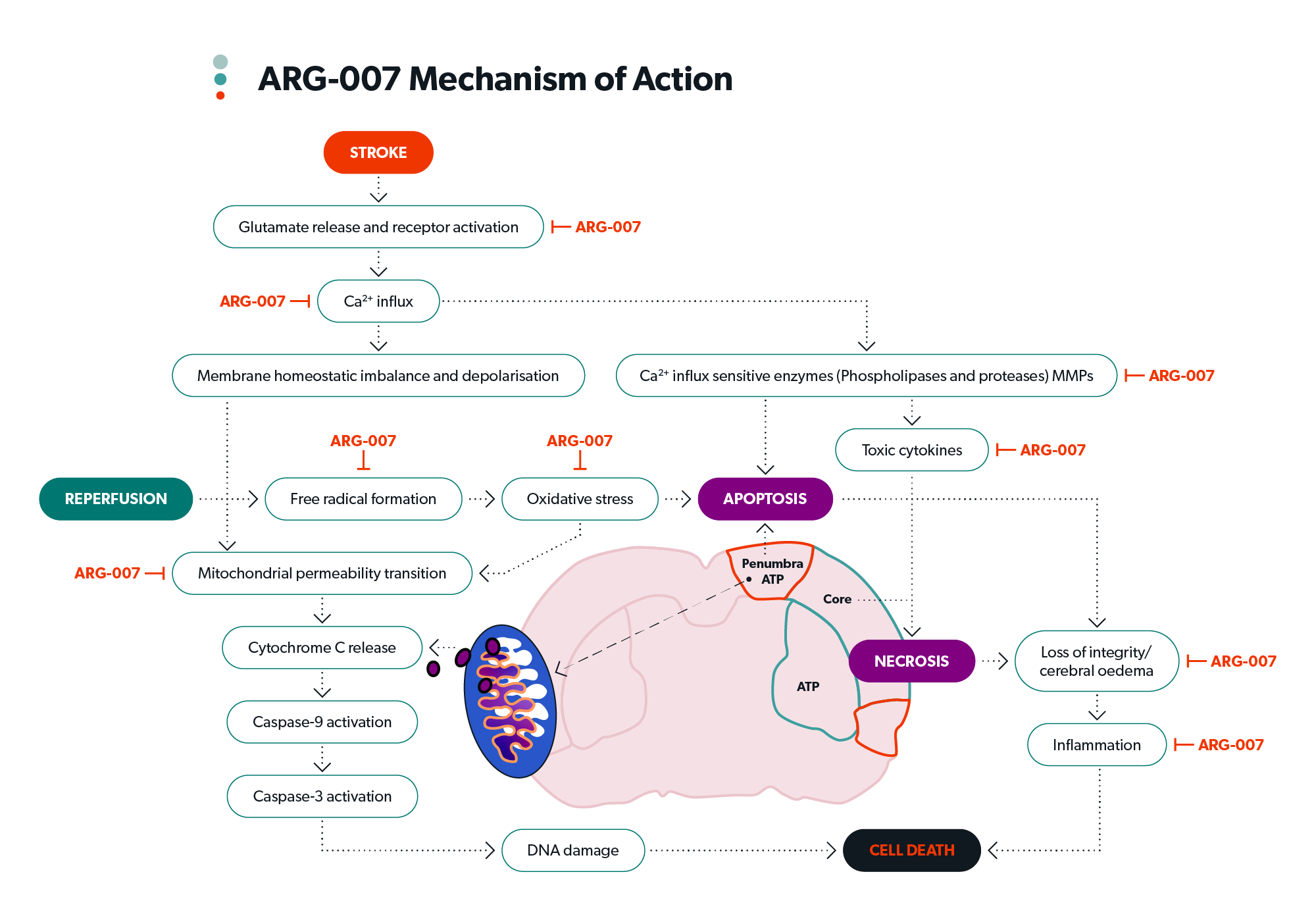 The ideal stroke therapeutic would target multiple parts of the ischaemic and excitotoxic cascade of events, as drugs affecting a single target in this cascade have not previously been effective in providing neuroprotection in stroke patients.

ARG-007 has a plurifunctional mechanism of action, affecting neuronal excitotoxicity, calcium influx and mitochondrial dysfunction, and reducing the activation of damaging proteolytic enzymes which greatly enhances its neuroprotective potential and translational clinical effectiveness.